The following competitions are listed upon the club notice board yearly for all members to enter. The winner receives a trophy to keep and the competition trophy to hold for one year. 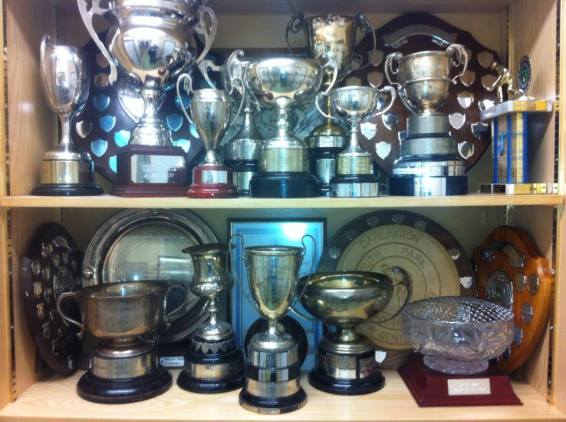 Club Championship (Morrison Cup)
This is the clubs main competition. This is a Four Wood Singles playing first to 21 shots. The winner of this competition is entered into the District League and EBA Champion of Champions. The competition was named after James Morrison who bowled for the club from its formation in 1896 and was Park Super-intendant for many years. He passed away not long before this trophy was named and his son James Morrison Jnr was still a big part of this club.

George Shaw Cup
This is another competition names after a former bowler who achieved great things in competition while at South Park Bowls Club. However this competition is now used as our handicap trophy to give those less gifted a chance to win a competition. This is a good competition to encourage new learners.

J.R. Hopperton Club
This former bowler played in the same era as many of our famous bowlers and had his name put on this trophy. Another trophy that has been around a number of years, often this trophy is now used for fun events and open competitions.

Jimmy Henderson Shield
Also a former member of the club, this shield is about 35 years old and used to be played as an open one day tournament but has since changed and become one of the main frame club competitions.

George Hill Trophy
Obviously named after another former member which was well respected many years ago.
This competition is the only team competition the club now runs due to the difficulty of getting entries in larger numbered competitions. This is ran as a pairs competition using four woods each which has been very popular over the years. 21 end pairs is always a good game however when the dark nights draw in at the end of the season it becomes tricky fitting the ends in before darkness!

Stan Johnson Plate
Stan is still a very well remembered member of the club whose wife presented the plate to the winner in the opening years of competition. This is a very nice silver plate which is played for on a yearly basis, often used for open competitions.

Mick Coleman Shield
Michael is the most recent bowler to have a trophy named in his honour. Sadly several years ago Mick passed away and Fred Freeman kindly donated this shield on his behalf. Michael was a great bowler for over 30 years for South Park and was well liked by all members of the club for being the gentleman that he was.

Centenary Plaque
This very attractive plaque made out of wood with sart engraving was donated by Norman Soulsby for the clubs 1996 100 year anniversary. This is played for on a yearly basis originally as a drawn pairs but as happens to everything, a decline in membership has meant singles has been more appropriate.

The Presidents Cup (Turner Trophy)
This Cup is ran purely by the selected president of its year. The date is selected by the president and can be singles, pairs triples, crown green it doesn’t matter – it is a fun day in honour of the president who would normally provide the prizes for this competition.

Fred Hopkins Memorial Trophy
This trophy has been kindly donated by Barry Hopkins in memory of his father. The trophy will be used as the new Works League Club Championship of which the winner will enter into the Works League Champion of Champions.

Glass Bowl
This was bought by the club to celebrate our new South Park Ladies team as our 1st female only competition. Unfortunately politics meant this team didn’t last long and reformed as North Park Ladies. The bowl is now used for South Park Player of the season.

Junior Cup
As we had a number of bowlers aged between 10 and 18 we had this cup brought in as a youth competition. This has now declined and become an under 25 trophy to match the age level county bowls plays at.

John R. Hopperton Cup
Veterans Trophy, we have 2 cups donated as a memorial for Mr Hopperton.

The Loraine Trophy
Trophy specifically for Veterans, Loraine Crescent is a near street to South Park where many members have been situated over the years.

The George Slatters Memorial Trophy
Trophy in memory of a past long serving member, specifically for the Veterans team. 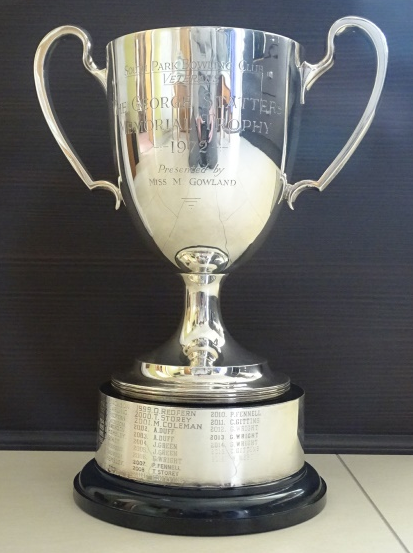 The JE Coverdale Trophy
Another memorial trophy in honour of a past long serving member.

Disclaimer: Darlington South Park Bowls Club have no control over any advertisements and their content within this website.  Adverts do not represent the views and opinions of the bowls club and are owned solely by the website provider.